How Much Does A Bale Of Hay Weigh? Giving The Right Amount Of Feed

Hay is very important for ranchers who need to keep up with the demands of their livestock. Animals such as cows, sheep, goats and horses can use hay as a source of food. It can even be used by people who are raising rabbits or guinea pigs. Its composition can also vary depending on the farm or region.

Hay is typically made up of dried grass, but it can also be made up of legumes. Some farmers will also use herbaceous plants in order to make hay. So that it can be used as fodder, it has to be cut, dried and stored properly. Variables in the type of plant used and in its processing affects the weight of the bale. 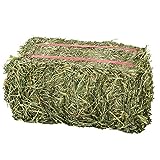 Knowing the weight of the bale of hay is very important especially for farmers who want to make sure that they have the right amount in store for the winter. Besides, hay balers can pack the bale of hay that they produce as tightly or as loosely as they want. Here are some information you might find useful.

How Much Does An Average Bale Of Hay Weigh?

A 3-stringed bale on the other hand is 44 inches in length, 22 inches in width and 15 inches in height. This type of rectangular bale typically weighs 100 – 140 pounds. These are much larger and heavier and it will require at least two persons to handle. These bales however, are solid and sturdy when stacked.

This is because balers or the machine that pack the hay into bales do the task without much regard for the weight. Instead, it aims to pack them in the right dimensions. You should also know that the amount of moisture in each bale of hay will have a significant impact when it comes to its final weight.

Balers that make rectangular bales of hay will use twine which are knotted to secure the hay. Since they are highly compacted, they are known to weigh more than round bales of hay. Although they can be easily piled on top of each other for storage, feeding them to livestock is labor intensive.

How Much Does A Round Bale Of Hay Weigh?

Aside from rectangular bales of hay, some machines are able to make round bales. Many farmers use it because it is much easier to feed their livestock with round bales rather than rectangular ones. The round bales however, are more difficult to stack simply because it does not have much stability. 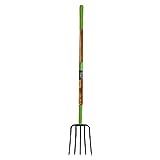 Round bales are also quite hard to transport because they have the tendency to roll around especially when you are using flatbed trucks. As with the rectangular bales of hay, it can be very hard to get a uniformed weight. As a matter of fact, most farmers will just say that their round bales weigh 1000 lbs.

A large round bale on the other hand that is 5 feet in width and 6 feet in height will weigh around 1270 – 1700 pounds. Of course, the only way for you to determine the exact weight is to use a weighing scale. But with the help of these estimates you can closely guess how much an entire lot will weigh.

Many new ranchers and farmers actually end up paying too much because they do not know how much bales of hay weigh. Without knowing the average weight of both rectangular and round bales of hay, you can easily end up not getting enough fodder for your animals.

This can actually be very dangerous especially during winter. To help you avoid this, you need to know the dimensions of the hay that you are planning to buy. Make your calculations based on the average weight that each bale should have so you will be able to have an adequate store.