No piece of equipment has had as dramatic a history as the chainsaw.

It has featured in many diverse situations ranging from a life-saving tool to an instrument of horror (Chainsaw Massacre anyone?) to a collector’s item.

Yes, some chainsaws were so good when they were made, people still seek them out even after their production has been discontinued.

John Deere chainsaws are probably some of the best chainsaws that have graced, not just forests and lumber yards, but farms and homes as well. That greatness is seen in the fact that more than half a century after production, some models, like the John Deere CS46 are still helping many cut down trees and harvest firewood.

What made the John Deere chainsaw so iconic?

Well, before we cut to the chase, let’s take a walk down memory lane and look at the history of the John Deere chainsaw.

​ The history of a man (and his future) can never be separated from the forest. Since time immemorial, the forest has provided its trees to man to use to build himself a shelter, fuel for warmth and cooking, and even wood for making different implements and tools.

In all this, man has needed a tool to fell trees and fashion them according to his needs. And for many millennia, that tool was the ax, till this day too. But felling trees and chopping them up with an ax was (and is) a laborious and time-consuming task.

As man developed and his need for more effective tools grew, the saw was invented – way back in the days Egypt was the hub of civilization. The early versions were made from shark’s teeth, and serrated stone and copper. Over the years, the saw developed into a tool that made life easier for lumberjacks across the ages.

But still, it was a laborious tool to use.

Surprisingly (I told you the chainsaw has a colorful history), the chainsaw wasn’t born as the tree felling tool you know it as today.

It was actually invented to cut a different kind of limb altogether – human limbs.

And no, it wasn’t an instrument of torture but a life-saving one.

The earliest records of an instrument that resembles a present-day chainsaw is that of the osteotome, a small surgical instrument that was used to cut bone. This instrument featured a chain with small cutting teeth whose edges were set at an angle. The chain was moved around a guiding bar by turning the handle of a sprocket wheel. This “chainsaw” was the brainchild of the German orthopedist Bernhard Heine who invented it circa1830.

The prototype for the modern chainsaw was developed (again for surgical purposes) by two Swedish doctors, John Aitken and James Jeffray in the late 18th century. This time it featured a fine serrated link chain which cut on the concave side. These surgical saws led to the development of drag saws, which were large mechanical saws with wheels to make them mobile.

In the 1920’s 2 notable advancements in the chainsaw were made, namely the first electro-chainsaw by Stihl and the first gasoline-powered chainsaw by Dolmar. These were still too heavy to be used by one person and thus chainsaws didn’t really catch on as they were heavy, cumbersome, and expensive.

That was until the early 1950’s when the first one-man chainsaw was created. Although they were much heavier than the chainsaws we use today, they were a hit.

The race was on to see who would create the best chopper.

The John Deere company has been one of the most successful equipment manufacturing and distribution companies in America (and the world) for over 180 years.

The company was founded by inventor John Deere, a blacksmith from Vermont, who set up shop in Grand Detour Illinois in 1837. His main business was repairing and making small tools and farming implements.

But that all changed when he invented 2 things:

The first was the self-scouring steel plow. This was the farming implement that changed the face of agriculture by helping farmers increase production.

John Deere also pioneered inventory in his trade. At that time, blacksmiths and other tool makers were working on an “on demand” model of production, meaning they only made something when a customer ordered it. But this model was too slow for John and he started making his plows and displaying them for customers to see. This drove sales as customers could see what they were buying and they could also buy immediately.

John Deere’s business grew at a very fast pace from then on.

And that is the pedigree from which the John Deere chainsaw comes from.

Although John Deere had their chainsaws made by other manufacturers, they made sure they got their supply from companies that shared their same philosophy of quality and innovation. Some of the companies that made chainsaws for John Deere include Pioneer, Remington, Echo, Efco, and, Homelite.

Let’s take a look at some of the best John Deere saws you can find today. And because of their excellent quality, you can find many a John Deere saw still running and doing a great job felling and limbing trees, chopping firewood, and any other task expected of a chainsaw.

So if you are a collector or just interested in a great John Deere chainsaw, read on.

The John Deere Chainsaw Review – The Chainsaw that Runs for Life

One thing you will notice when you go on the hunt for a John Deere chainsaw is that they don’t all come in the same color. Y

You’ll find some decked in green, others in orange, while some also come in yellow. The reason for this is that this color coding was used to differentiate a John Deere chainsaw made by one company from another. For example, Efco made the green ones while Echo made the yellow ones.

So let’s look at a couple of these iconic chainsaws, shall we?

This is one pro-grade John Deere chainsaw that was truly made for home use as it is portable and easy to use. This little green beauty is Italian made by Efco, and, as you can expect, it will run well for a very long time. The only thing that will stop it is the lack of parts, but for now, that’s not something to worry about.

The John Deere CS46 chainsaw originally came with 16-inch and 18-inch bars but you can even run a 20-inch bar easily if you find one with the engine still running well. Speaking of engines, this John Deere chainsaw comes with a gas-powered 45cc engine. Despite its lightweight size, this is one chainsaw that packs a whole lot of punch as long as power is concerned.

Some of the other great features you will find on this chainsaw include an easily accessible side tension adjustor, a decompression valve, an adjustable choke, and a primer. It also has a great anti-vibration system that will allow you to use it for prolonged periods without your fingers become numb or your shoulders becoming painful.

Because the design is not complicated, this John Deere chainsaw is easy to maintain and repair without having to take it to a service shop. This is definitely one well-built chainsaw that you will enjoy using.

Another great John Deere chainsaw you shouldn’t pass up when you run into is the John Deere CS55.

This is another excellent pro-grade chainsaw designed for the various tasks a chainsaw should do around the home or farm. And it does what it was built do very well.

The John Deere CS55 has a 55.6cc engine and comes with an 18-inch guide bar but can easily handle anything from 16 inches to 20 inches. The engine features a 2-ring piston setup that makes for higher compression and more power, increasing the efficiency and effectiveness of the chainsaw.

The fuel capacity on the John Deere CS55 is 23.7fl.oz. Not much but due to its frugal use of fuel, it will definitely help you get a lot done before it needs refueling. This is another John Deere chainsaw that won’t break your back as it only weighs 12.6lbs.

When it comes to safety, the John Deere CS55 is fitted with an effective inertia chain brake and also features a low kickback chain, making it as safe as they come. That being said, safety gear must still be given priority before you go out and start running the saw. Another great feature that is found on this John Deere chainsaw is the adjustable oiler. This allows the chainsaw to use less oil in certain situations, making it more environmentally friendly (and more economical as you will need less oil).

Other notable features of this must have chainsaw include:

If you are looking for a gas-powered John Deere chainsaw that will give you the best power to weight ratio and a whole lot of oomph, then the John Deere CS55 is it.

But if you are looking for something with a little more power, John Deere still has something for you. 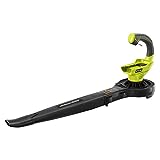 The Ryobi Ry40400 is one John Deere chainsaw that is fast becoming difficult to find – a true collector’s item if you may. And that is because it is one of the best John Deere chainsaws ever made. This model was made by Echo, hence the yellow color.

The Ryobi chainsaw features a gas-powered 61cc twin cylinder and weighs a hefty 15.2lbs. The weight and the fact that it doesn’t pack as much power as some newer lighter models make this more of an occasional use chainsaw than a daily driver. But when you do use it, you will definitely enjoy the throttle response and the smooth cutting it affords.

As for features, this chainsaw comes with an 18-inch bar but can also easily run a 20-inch one. Safety-wise, it comes with anti-kickback, a chain brake, and a trigger lock. This model was also reduced to handle vibrations very well, making it easier to deal with the weight.

The John Deere Chainsaw – A Chainsaw Every Collector Should Have

Whether you are a farmer who loves matching tools and equipment or simply looking for a great collectible chainsaw, you won’t go wrong with a John Deere chainsaw. The fact that they are still running close to 50 years later is a testament to the quality of machine they are.

So if you bump into one, don’t hesitate to take it home with you.